Time after time, our higher educational institutions’ academic calendar collectively (as a country) experiences some kind of shock that would define what would happen to the admission processes of the current session or the next session, and also the time such admission processes would happen, and how they would happen; a good example of this shock is the incessant ASUU strike that’s always popping up all of a sudden. The shock becomes oftener when it’s all pinned down to some particular schools in Nigeria, and when it is finally pinned down to OAU, such shock cannot not be expected almost every session. But this time around, it can be said that what caused the shock in the education system is understandable—the power of a pandemic is a serious power.

By now, it is safe to start thinking—should the school resume anytime this year—most higher institution will end up not conducting the Post-UTME on their applicants in form of a test; they would only screen and analyze the candidates’ credentials and results and offer them admission based on the result of the analysis or deny them of it. The reason for these would be because the applicants have been out of academic activities for a very long time, and the psychological part of education frowns against conducting some sort of promotional test on any student that has been switched off from the processes of learning the needs for such promotional test for a very long time. So the schools would have to wait for a while after resumption (if they really want to conduct a test by all means, so the candidates can recuperate), or they would just go ahead and employ other means of offering admission based on the credentials the applicants already possess.

When such case described above is pinned down to OAU, it’s most likely that OAU will make the applicants pay for the Post-UTME screening and just analyze their papers and conduct their admission selections based on that, OAU has done this a couple of times in the past few years, and it is always because of the fact that the school is still lagging behind with one whole academic session from the series of long strikes that happened in 2007 and 2013/2014. In fact, OAU just started the 2019/2020 session when schools had to shut down for Covid-19, and the 2020/2021 admission process was ripe enough for schools to start working on them. Contrary to what many people would think, OAU will not cancel a whole session just to fix the gap between the chronological year and the admission year they are on (i.e. We are in the ending parts of 2020 but the school is just starting the 19/20 session), OAU is not used to canceling sessions or merging two sessions, they just keep running the sessions no matter how far behind they are with the chronological years and with the JAMB’s admission calendar.

When OAU eventually resumes from the pandemic break, let’s not expect the cancelling of the 2020/2021 admission or the 2021/2022 session, or the merger of any of the two sessions, or the refusal to accept admission applications for 2021/2020 session, but we should expect a very fast session anytime OAU is back to it, as students wouldn’t like to take anything slow when academic activities eventually resumes, neither would the school be willing to slow down on anything—at least for a while after resumption. But let’s not expect a Post-UTME (in written form) for the 2020/2021 applicants. This can only mean admission for this mentioned session is just going to have to be a real rush as most applicants have the standard O/Level results and the high UTME scores that inflate will their total score, so let us expect high departmental cutoff points for the 2020/2021 admission session as the school’s way to drop as many people as possible, and a thorough and competitive admission processing too. God help us all. 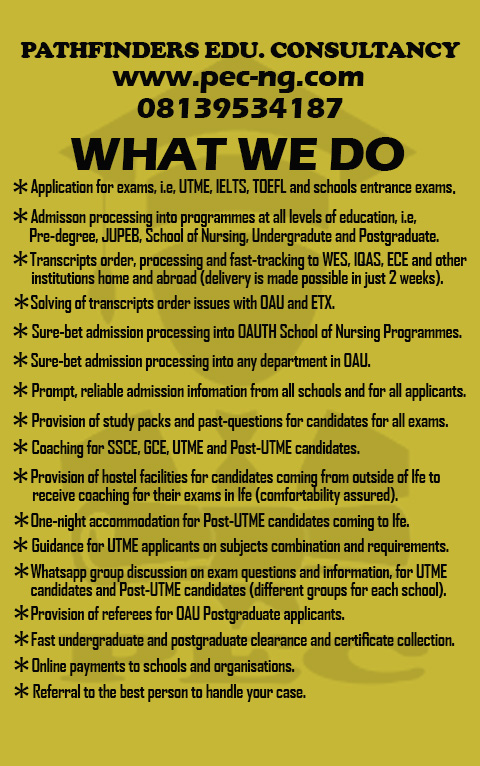