The Night Before (The Remake of Unburning the Night Candles)

I long time ago wrote an article I titled “Unburning the Night Candles”, but unfortunately I just cannot find it anywhere this time I’m ready to publish it (for the exam-writing OAU students); so I thought of making this one to be a remake of the lost “Unburning the Night Candles”. I will however make sure this one is only similar to what’s in the lost article and not exactly what's in it; so that when I finally find it I could still publish it too (I'm sure I will find it, I’m too meticulous about everything to lose anything I write), because really, that article should be published; it’s that awesome.

The lost article was written to clear the myth of having to burn the night candles for you to qualify for excellence in your exams. Though this one is meant to talk about something like that too, but it’s not that much of standing against having to burn the night candles to excel in an exam; I just—with this—want to try making some things clearer about people making it seem as though if you don’t read all night the night before your paper, you cannot perform to your best. In fact, to my personal knowledge, the case is the other way round. Going straight to the exam halls from a sleepless night could make you perform lower than your best; and that’s in fact the situation in most cases. You can start relating this to the Efficiency Theory now, if you know Psychology.

Though it may be true that after studying all night the night before your paper, you are all charged up and full of stuff to download for your examiner, but then, there is something called “The Rhythmic Functionality of the System”; every system—no matter what kind they are respond to this rhythm in their functions. I'm saying: having so much in your head is not enough; having to express what you have in your head to the best is essential too. In terms of writing exams and preparing for one, what you have loaded has to be offloaded, rightly, and to its best (talking about bringing quickness, creativity, and correctness together), so as to open you to the best outcome. Saying that, factors that could deter you from offloading what you have loaded to its best become things to discuss; and a sleepless night before your paper is one of them. Students who wait, and the over-anxious students are the ones who always have to be up all night stressing all their senses to stay awake the night before their paper. The ones who wait for the 23rd hour to start preparing, and when it’s just a very short time left for them to go write their paper, they start pushing the body system to hard. Too, the ones who are over-anxious are always going about thinking they have not studied enough, so they’ll keep studying till they have spent the whole night sleepless. The eyes will war all night to remain open—even when they so want to be closed—so as the rest of the senses that should be at rest through the night. Hence, they start being in the need for the rest they missed last night, even when you so need them to be efficient to their best in the exam.

Sometimes, the senses may not rush the demand for the rest you didn’t give them when they should have it, all because you are still anxious about the exam and all; but it will always tell on their effectiveness even when you feel you are alright inside-out. The human system—and any other system for that matter—is meant to follow a certain established order to function and function efficiently. If any part of this order is missed anyhow, functionality will certainly be affected. Biologically, the human system is programmed to refresh itself at its due time, if the due time is missed, it will tell, first on the functionality of the most affected part of the system, and later on the whole of the system. If you put your brain to rush just because you still have so much you have to cover to be ready for the paper you have tomorrow, it will tell on your retention and remembrance, and even on your creativity; those are some psychological stuff you should take serious if you want to excel in any exam. The body system just has to shut down when it has to, so as to be back to function even better when it is rebooted.

It will take only the smart ones to understand that burning all the candles all night the night before a paper is not the best. The smart ones prepare ahead so when the exam is nearer, when the exam is just few hours coming, they get to let the senses rest to their best. They let the brain decide on what it wants—whether to study even more or relax, they don’t push it. Be a smart one, understand what's best for your system and what can spur it into functioning to its best to drive you into the best of your performance in your exams. You will be surprised how recalling and creative you can get—all just because you gave your brain and senses—in due time—what they like to have—rest. 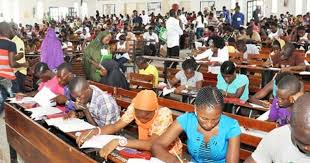