It is arguable that no generation in education has ever witnessed the much criticisms the First Class Honors gets in this present generation, and to be projective, it doesn’t promise to not escalate. I mean, in education we are heading towards that generation when you may be shy to tell someone you graduated with a First Class—especially when it’s been a while you graduated and you are yet to figure out a thing to do with your First Class.

But if we’ll be sincere, is it fair? Is it fair how the honor we give a First Class graduate lasts but just for when they are still the freshest graduate around? Knowing that people who graduate with the First Class (especially in schools likes OAU), must have missed most part of “life” in their pursuit of the First Class, and then they enter the world after leaving school only to be novices of so many things that aren’t so related to books; things employers and investors now look for in the ones they want to be interested in.

The devaluation of the First Class and its holder is a serious educational problem which will sooner or later definitely have a hard hit on the society, its economy and everything else; and to be blunt, the government is not noticing this problem yet; or maybe they do, and they just do what they do to many other problems they notice—nothing! If you are that First Class pursuing student, this is to let you know it’s not a bad thing you’re doing wanting to be among the very few students who will be standing tall in the apex position of their class. Like, isn’t that what education, school and examinations are for in the first instance? To discriminate the best from the rest. Just do your thing and keep chasing that which you desire. But as you do that, don’t forget to live, as what you learn from living is what paves ways for you nowadays, not necessarily what’s on your paper-certificate anymore. 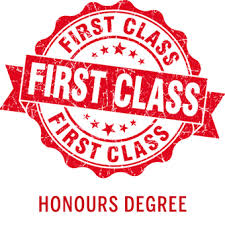