They say change is inevitable, and that even if we don’t try to change things, things will sooner or later change by themselves. Same thing can be said of the sudden change in the mode of writing Post-UTME in OAU; not that it’s really strange, at least we have moved from not writing any other test after passing the JAMB’s exam to writing Post-UTME using pen and paper, then to not writing any test but only use the O/Level results and the UTME scores to define who gets and who does not get admitted, to taking the Post-UTME on computer, and now to taking the test over the internet, so this is not that sudden. But no one would think that would happen this year or even so soon, but because situations help us change things even when we don’t want to change them, here we are now preparing for the OAU Post-UTME test to be taken over the internet, and that’s scary. Scary because just anything… anything at all can happen to make the person who had gotten a lot of A’s and B’s in their O/Level results and a very high score in their UTME end up not getting admitted.

Out of a lot of things that could happen while taking an e-test are computer glitches, software malfunctions, internet issues, and so on. When the tests were done on the computer with no internet, I saw a case of the computer shutting down automatically while the time of the test was still counting down. I saw when the computer kept hanging for several minutes while the candidates couldn’t shutdown and restart so as to not lose their test time. Power surge had made somebody’s test submit automatically while they were still writing the test. I’ve also heard of someone who answered and submitted all their questions, but when the results came out, it says the candidate only answered 5 of 40 questions. A lot of cases like these are there to prove that the computer can screw anything up sometimes. Even now that OAU is just for the first time trying to conduct an e-test, this makes it even more likely for something to go wrong. But how do you avoid being unfortunate with your computer and your internet while you are still on your test? I have an idea.

1.      Use a standard ICT center, preferably the ones that have been conducting e-Tests before or do JAMB registration for candidates. Don’t use a cyber café; they probably have computers with low RAM and viruses, which would both make the system slow and likely to malfunction. They also probably have bad internet that could make you lose time. So find an ICT center with good computers and webcams and internet service. If you are in Ife or anywhere surrounding Ife, advisably, go to one of OAU’s ICT centers on the Ife campus or at the CDL center in Moro; you are most likely to have everything better there than anywhere else. Just have #1,000 with you to pay to them.

3.      No matter what you are doing, don’t be caught up with the computer having to time you out by itself, make sure you have one or two minutes to go through your answered questions again, to make sure everything you answered are still there. Make sure you do this before finally submitting.

4.      If anything strange happens while writing your exam, call the supervisor’s attention to it immediately instead of battling with it yourself. The chances are they have seen that problem before and they have the solution to it.

I wish you the best of success in the test. 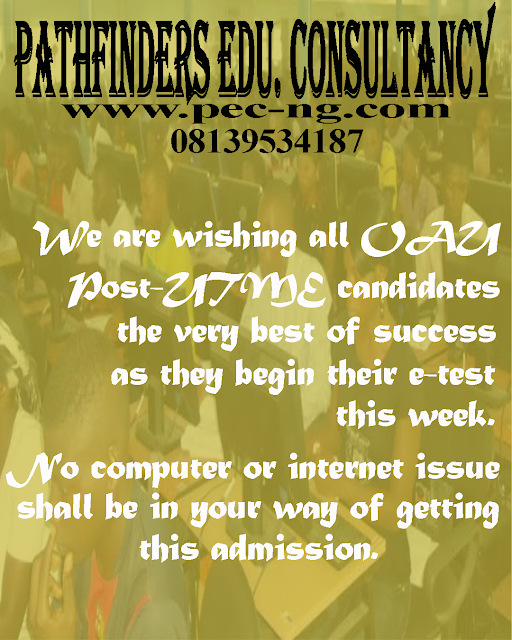