Proof of Proficiency in English Language: How Important is it to Your Foreign Admissions and Scholarships Processing [TAGS: NAIRALAND, GOOGLE, OAU, PROOF OF ENGLISH, PROFICIENCY, UI]

Proof of Proficiency in English Language: How Important is it to Your Foreign Admissions and Scholarships Processing

As most graduates don’t even know what academic transcripts are until they want to further more and theirs is requested for, or their employer asks for it, or when they are trying to travel abroad then their academic transcripts becomes an important document to provide before anything can even begin on their emigration processes; same thing applies to how most alumni don’t even know what a Proof of Proficiency in English Language is until they are required to provide it. This affects foreign admissions and scholarships seekers a lot. There are thousands of people who have been waiting for the foreign admissions and scholarships application season to begin (which begins in the next few weeks), but then the season would come and they would still be found lagging because they were only waiting instead of preparing while waiting. Preparing while waiting involves finding out all the things you would be needing and getting them in readiness for when the race would begin. This write-up is to talk about Proof of Proficiency in English Language as a document needed in such endeavour, its importance to your emigration processes, and how to get one from either of OAU and UI.

Proof of Proficiency in English Language is a document from your school written in your name to you (to be in your possession so you can use it as many times and places you need it) or to an institution for you (for one-time use as this kind is specifically addressed to and delivered by your school to an institution where you need it). In it, your school states that they taught you in English Language, and they state the kind of English Language they taught you in. This document is requested by some English-speaking countries so you wouldn’t need to write the English tests like IELTS and TOEFL. It is also requested by most of the schools and scholarship bodies in the English-speaking countries when you seek admission there; this is so because they would need to know (should you be admitted to their school) teaching you in English Language would not be a problem. Some employers of foreigners request for the document too (depending on the occupation tho), evaluation bodies like WES, IQAS and SAQA ask for the document too. This makes the document almost as important as your transcripts in your emigration processes.

Now, how do you get your Proof of Proficiency in English Language from OAU or UI? It is not a rigorous process, only that a lot of on-ground logistics are involved (if you know what I mean), which makes it impossible to be a thing to do online; forms filling, receipts conversion, submission of supporting documents (like copies of your certificate), the bureaucracies causing unnecessary delays before the document is finally ready for collection, and so on. The implication is that you are going to have to go down to your school to get it yourself or have somebody do this waka-about for you. However, we the PEC team, we do this for a price, and we get your Proof of Proficiency in English Language ready to be couriered to your doorstep in just 2 or 3 days. Let’s talk about getting yours too if you haven’t gotten it before. Call us now on +2348139534187. 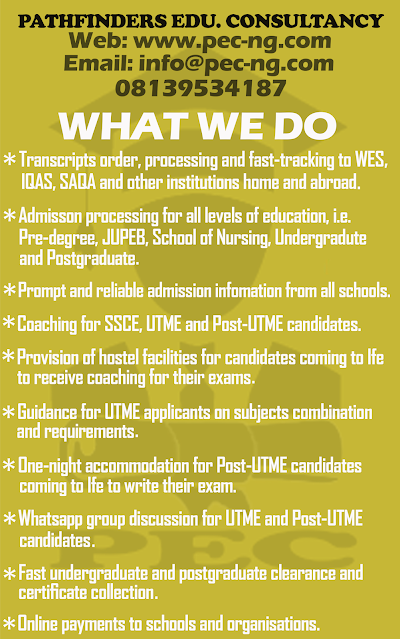